Menu
Log in
Register
Install the app
You are using an out of date browser. It may not display this or other websites correctly.
You should upgrade or use an alternative browser.

Trader Group
BoA, in concert with Visa, did its best to drive me crazy today.

I wanted to send a gift to a friend in Germany, went to a German website I have used before, and placed the order, using my Bank of America credit card. The charge was rejected by Visa, presumably because they found it strange that somebody in Israel would use an American credit card to buy something in Germany. The website gave me a telephone number to call to get approval for the charge.

My call to that number brought me to a Visa rep in Houston. She told me that she could not help me because she does not have enough information to identify me. She told me to call the telephone number on the back of my card and they would notify her to accept the charge.

That number was in New Mexico. She was able to verify my identification but saw no charge that had been rejected. She sent me a one-time verification code by e-mail, and when I told her the number, she felt that was enough for her to be certain that I am me, but that she had to transfer me to Security. The Security rep was in Delaware, and after she again identified me, she told me that I could place the order again -- but only within the next 60 minutes -- and it would be approved.

I went back to the German website and went through the whole process again (which is a bit difficult as the website is in German, and I only speak it well enough to get into a bar fight in Munich). Finally, however, I was able to send the order.

Trader Group
There is one thing I miss by living in Israel: Halloween. Today, I decided to do something about it.

I phoned a woman who is responsible for culture on our kibbutz and asked her how many children we have between the ages of 6 and 12. She told me that there are 48 of them. I asked her if she thought they would enjoy trick or treating (at least at my house). She told me that they all know about Halloween from television shows and the internet and would love it.

I then went to the Amazon.com website and ordered the following:

1. A scary LED light-up mask (for me to wear).
2. 50 Halloween-theme Corona masks (for the children).
3. 72 glow-in-the-dark bouncing balls with Halloween designs. (I could not get just 50.)
4. 50 Halloween self-inking plastic stamps (meaning they can stamp the designs on whatever they want).
5. 60 trick-or-treat goodies bags.
6. 300 temporary tattoos (again, the smallest number I could get).

The main reason that I bought the mask for myself is that shipping to Israel is very expensive, but everything that I bought came with an offer of free shipping if the order total is $65 or more. I was about 35 cents shy of the $65 and my mask cost $7.99. By ordering it, I saved about $40 in shipping.

Everything in my order is supposed to arrive by October 6 (except for those tattoos -- for which they could not give me a date yet).

When the things arrive, I will give the woman I spoke with the Corona masks, the balls, and the plastic stamp. I will also give her the tattoos whenever they get here. I will take one of the trick-or-treat bags to a candy shop to see how much I can fit in them (they are 9.5" x 5.2" x 3.2", so I should be able to get quite a bit in them). I will get 50 of everything (48 for the kids on the kibbutz and 2 for Marina's daughters).

The kids will have to come to my house on Halloween and announce "Trick or treat" to get their candy. This will confirm to their parents what they have always suspected -- that I am certifiably insane.

On the other hand, I think the kibbutz dentist will be thrilled by this idea.

(No, I am not giving any candy to my granddaughter. She will be about 2 1/2 months old on Halloween and I don't think that my daughter wants her to be munching candy at that age.)
Last edited: Sep 18, 2021

Trader Group
Just in case anyone has been wondering, Barney the Bull has been captured!!!

A bull that escaped from a farm on Long Island and eluded searchers for two months has been captured, authorities said Thursday. The 1,500-pound (680-kilogram) bull, nicknamed Barney or Barnie, was corralled late Wednesday by staff from Skylands Animal Sanctuary and Rescue, Suffolk County SPCA...

He escaped a Long Island farm and the police were not able to capture him for 2 months. They made a corral, brought in a female cow, but Barney would not take the bait. Drones and planes were used to look for him. As I drove to my other house, I would see the signs in the highway, near my exit, warning there may be an animal in the roadway. A picture of Barney on Facebook showed him on the lawn of a former classmate of the twins. LOL.

An animal rescue group from Wantage, NJ will let Barney live out the rest of his life at their sanctuary. However, Barney is a free spirit and jumped the fence but did not get far. They rounded him up and he is securely behind the fence now. He even made the news again tonight. 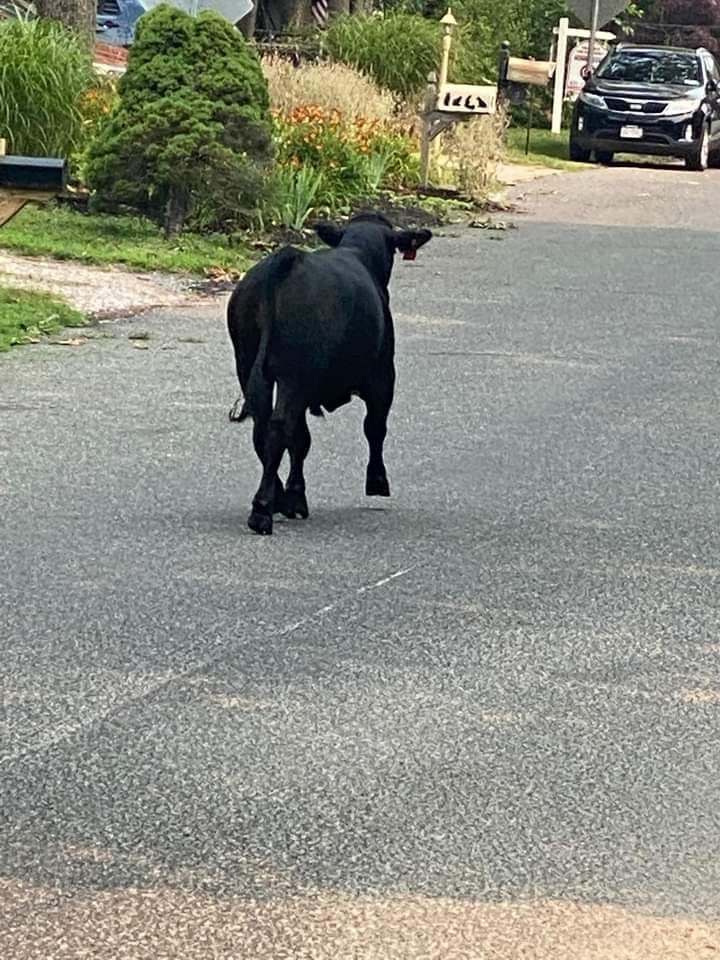 Barney, the 1,500 pound bull that escaped from a farm in Manorville in July has been found in Moriches. Suffolk County police said Barney will be sent to Skyland Animal …